We WILL be playing out of the bunkers.  YOU MUST RAKE THE BUNKER AFTER PLAY.

Rule 19.3 - When your ball is in a bunker, you may take unplayable ball relief using one of four options.

For the 2022 season, a handicap will be established after fifty-four (54) holes of golf are played.

All fun nights are the last Thursday of every month.

League play begins Thursday, April 14 and continues every Thursday evening ending with the banqet on September 29. Each week you may begin play at 1:00 p.m. and continue until 5:30 p.m. allowing as many members as possible the opportunity to play.

League competition is flighted by handicap based on the GHIN system.  The League Night Committee Chair will determine the handicap ranges per flight.

Refer to 2022 JHLGC Rules for more information on Divisions.

For complete league rules, please see the Late Swingers Guidelines. It is up to you to be familiar with rules and regulations for this league. (They’re not difficult but it’s some stuff you might want to know.)

For the 2022 season, a handicap will be established after fifty-four (54) holes of golf are played. A player must also play seven (7) of the nine (9) holes to constitute a round of golf for handicap purposes. 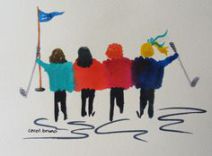